Before our days of being shot point blank by our son’s super soaker 3000, in the days when we were just cleaning pee off the carpet and not ourselves, I liked to joke with people when they would ask if I had any children…

I’d say “Yes I do, they are 7, 6 and 3. We adopted two from a shelter and paid a farmer 100 bucks for the other one.” and they would nod in amazement, while contemplating if they had heard me correctly. And let me tell ya, at times, having 3 dogs in our one bedroom apartment (against complex policy) seemed as if we did have children. Mainly because of the brown one pictured above…

Some people will say that there is no comparison to having a baby and a dog. Most of the time I would agree, but Kimmie, our chocolate lab, proved me and all those people wrong. If the last four months have told me anything, its that there are a lot of similarities between Kimmie as a puppy and Grayson as a newborn. They both would wake up crying 4+ times a night, they would both pee uncontrollably, and when we would leave the house we would put them both in a crate. My wife will admit, while the apartment days were our beginning and we wouldn’t change it for the world, it was a wake up call that truly prepared us for what we are going through now.

Okay, before I go on and you call child services on me, Grayson does have his own crate, so its not like he has to share with any of the dogs or anything (Of course I’m kidding…).

Okay, back to what I was saying…Kimmie, without a doubt, prepared us for parenthood. Between swallowing a deer antler, my Fitbit (I wonder how that felt once she hit 10k steps), eating a whole container of gum, and countless other things that caused us to pour hydrogen peroxide down her throat to make her vomit, she definitely prepared us for a child…a crazy child. I’m honestly surprised we don’t have the outlets covered yet. Basically, she makes Marley look like Best in Show.

She was our test run and helped us handle taking turns getting up in the middle of the night, and let me tell ya, it didn’t happen without some yelling and choice words for each other about whose turn it was when she would start whining at 2, 3 and 4am in her crate. We made a decision then to let her sleep with us so that she would stop the whining, and now at 3 years old she won’t stop whining until we let her sleep in our bed. Pain in the ass right? I hear some people actually like when their dog sleeps with them…guilty.

Another similarity between dogs and kids…your choice for instant gratification now will eventually come back to bite you.

Before our less hairy pup arrived, my wife and I were your typical dog….parents. You know the type, the one’s who prefer to be refurred (see what I did there) to as fur parents over just ya know….dog owners.

The ones who take selfies with their dogs, who stop by a dog bakery more often than a real bakery, and feel as though if you miss your dogs birthday you might actually hurt their feelings. The type who get matching jerseys with their pet for game day…

Okay, were we that bad? No. (shaking my head yes)

People always told us, “Once your baby gets here you are going to wish you didn’t have three dogs.  They would say that “with your new bundle of joy you won’t even notice you have dogs anymore.” They, who I referred to in my first blog entry, were 100% wrong on this piece of…opinion. Little did they know, our chocolate lab has a knack for not going unnoticed. Besides “sit” and “pound it”, being noticed for good or bad (mostly bad), is her greatest talent.. 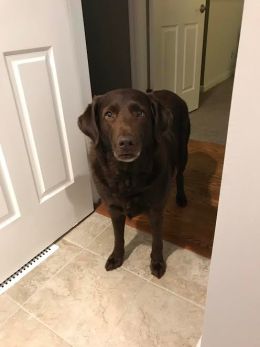 (Can’t even fake dump without her bitchin’ about something)

She’s the type of dog that I stop and watch when she’s doing something bad because I can’t believe its happening. Like when she was a puppy, she was not only on top of the glass coffee table, she was peeing on top of the coffee table. I felt like Ron Burgundy in Anchorman “What? You pooped in the refrigerator? And you ate the whole wheel of cheese? How’d you do that? Heck, I’m not even mad; that’s amazing.” So of course, before I told her to get down, or before I used half a roll of paper towels to clean it up, I took a picture. Being the father of a boy, I’m clearly over the touching pee issue…like I have a choice…

Or there’s the time pictured at the top, when I walked in on her with an “I Love Daddy” binkie in her mouth, using it correctly. Now, I can’t tell you how many late night runs (8:00ish) to Buy Buy Baby I’ve had to make because of Kimmie using the last of Grayson’s magical pacifiers, but how could you not think that was the cutest thing ever? And off to Buy Buy Baby I went, thinking about how much my dog loved me.

Other times, she doesn’t send me off into the sunset dreaming of my return. One filled with licks and a hug with her paws around my shoulders. Like the time I made dinner for my wife. Pork chops with grilled veggies, steamed potatoes and something else I got out of a box and put in the microwave and called my own.

As I turned my back to get the drinks, it happened. Kimmie snagged one of the pork chops and was already finished waiting for dessert. At that point I was okay with just letting Rachel have the remaining pork chop, and I’d just heat something up from my mistress, Marie Calendar. Long story short, Kimmie also stole the second pork chop, and Rachel and I enjoyed a nice vegan meal. Its the thought that counts, right wives?

You may be asking yourself, “Don’t you have three dogs, why do you only talk about this one?”

Another similarity between dogs and kids, there is a favorite…or at least one that that gets the most attention.

But, easy answer, have you seen the picture on this blog? She’s adorable. In reality, its because most of the time you wouldn’t even notice the other two. Not because they aren’t great dogs, but because they aren’t assholes. I mean, everyone’s kids have their issues. One may have ADD, the other is in an “I hate you” phase, and the other is what you like to refer to as “street smart” to make yourself feel better.

Another similarity between dogs and kids…they all have their shit, and sometimes eat it too…

Taylor, the smallest one, is on Xanax. Yes, dogs can be on Xanax, I don’t need PETA on me too, people. Taylor likes to destroy things while we are gone, not because she hates us, but because her anxiety is so high she truly believes we aren’t coming back, even though we always do. She gets so upset that at times it looks like Bob Knight just came in after a bad call and started throwing shit. Some of you may be saying…”That sounds like an asshole to me.” I hear ya, but hold on, there is a difference…

The difference is that Kimmie will make sure we are home and watching. She will get our attention, look us straight in the eye, then piss in our son’s room on our brand new carpet because….well, because.

Taylor thinks we left her for dead, Kimmie just feels like it…

And Bear, the peoples’ favorite, the easy one. He’s the kid who is on honor roll, captain of the insert sport here team, in French club, very polite, and flies under the radar because of the other two, therefore we never really notice when he sneaks away to hump the neighbor’s golden.

Not only did dogs prepare us for a child, they prepared us for having multiple children. While they make us worry, can be demanding, disappointing and at times infuriating, we love them.

Hey everyone. My name is Grant Steward, and I am a dad. When I started this blog I was a new dad, but now I have 3, which is obviously why I haven't posted in awhile. My wife Rachel and I are lucky enough to be the parents to our son Grayson, who was born January 3rd, 2017, our daughter Spencer, who joined us June 15th, 2018, and our son Cameron, who was born June 16th, 2020. We reside in St. Louis, MO where Rachel is a high school science teacher and I am an elementary school counselor. We have 3 rescue dogs named Bear, Taylor and Murphy (RIP Kimmie). Between the kids, pups and our professions, we have all kinds of stories and experiences, and I am excited to share my life with all of you. My goal behind this blog is to share all things dad…and our many other roles in life…I hope you enjoy. View all posts by Father Chime

Facebook: Father Chime: Chiming in on all things dad...

This is a text widget, which allows you to add text or HTML to your sidebar. You can use them to display text, links, images, HTML, or a combination of these. Edit them in the Widget section of the Customizer.